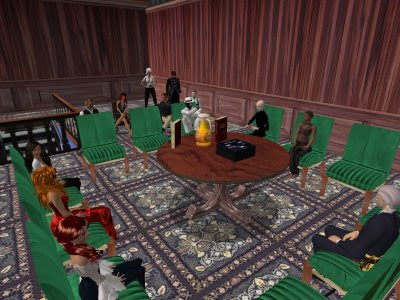 The Confederation of Democratic Simulators (CDS) recently celebrated its fourth birthday. This makes the CDS Second Life's longest-running democratic, self-governing community. It is also one of the most long-lived of any Second Life projects, most of which do not survive a change of leadership. The founders of the CDS (or Neualtenburg as it was then known) were right in one of their reasons for choosing to use democratic structures of self-governance - it allows for continuity and persistence of the project. As one group of activists tire or move on, others are able to take their place, re-energise the project and bring in new ideas so that things don't get stale. Democracy isn't pretty but it is resilient.
I could have said that the CDS is Second Life's *only* democratic, self-governing community and that would have been true for most of its history. But the CDS has been joined by one or two more groups that have decided to run themselves along democratic lines in recent months. Cedar Island is a small SL community focussed on research and creative work. It's a beautiful place, designed by Jon Seattle with help from Moon Adamant inspired by communities of the US Pacific Northwest. Cedar Island is run by its residents using consensus decision-making. I was part of the community for a short time but didn't get to any of the monthly resident meetings where membership and community policy are decided. Cedar has been joined by a related project called Port Spinoza, also designed largely by Jon Seattle, focussed on individual and group learning in SL. Its inspiration comes from the Netherlands in the Age of Enlightenment and also uses consensus decision-making.
Other communities, also mentioned previously on this blog, have the potential to head in the direction of being democratic communities but are not there yet.
So, how is the CDS? Six months ago I was comparing it to Zimbabwe, how is it faring now? Well, things are certainly quieter than they were six months ago! The last set of elections, held in July, returned three representatives each from the Citizens' Social Democratic Faction (CSDF) and the Democratic Pragmatists' Union (DPU) and one from NuCARE to the Representative Assembly (RA) - our legislature. The RA has met approximately fortnightly since then but I think it would be fair to say that attention has shifted elsewhere; the RA is no longer 'the only game in town'. For most of the CDS's history, if you wanted to get something done you went to the RA. This was partly due to the nervousness around executive power and the unwillingness to grant any kind of power to an executive branch which could potentially be abused. The CDS didn't even have an executive branch for much of the time with executive-type powers being shared between the RA and the (old) Guild (a quasi-corporatist structure with powers over building and finance). The establishment of the Chancelry as the institution with executive power, and in particular the active stance taken by the current Chancellor, has shifted attention away from the RA. It's no longer the RA that 'gets things done' but the Chancellor and his very capable team. This has been a positive development so far. It allows those who are interested in events organisation, for example, to work with a team that can get things done and who have the legitimate authority to do so. This is not to denigrate the work of previous Chancellors who have also made their contribution, it's just clear that the institution is really showing its promise now that we have had time to get used to it.
Civil society is reasonably healthy too. The Virtus NGO which owns and operates the Monastery in Alpine Meadow sim has put forward an ambitious plan which, if successful, could lead to the purchase of our first void sim (and our fifth sim in total). There is still plenty of arguing to be done over the terms of this move (it wouldn't be the CDS if we didn't argue a lot!) but it is a sign of the health of the community that people are inspired to put time and energy into such a project. By contrast, the Sturm und Drang over the establishment of a Chamber of Commerce had not yet lead to anything actually being put in place. But that is probably because (sssh, don't tell anyone) we don't really need one! I've also heard rumours that an NGO may be forming to make more use of the Neufreistadt Church on a more regular basis. Gwyneth Llewelyn has restarted her Sunday discussion groups at the Church which is another welcome addition to the range of activities in the CDS.
So, Zimbabwe no more :) Perhaps the CDS is more like a country recovering from a period of temporary insanity? Like France after the excesses of the Revolution, the Terror and the guillotine? Or Britain after the industrial strife, power cuts and three-day working week of the 1970s? Or the Venezuelans when they wake up from the disaster of Chavez's Presidency?
This 'quiet' period is perhaps a time in which we can address some of the issues which have frustrated us in the past. Passions are cooler, tempers are less frayed and (as far as I'm aware) no one is issuing death threats against any other citizens. This is a rare occurrence; we should make the most of it. So, what are the sins crying out to heaven for vengeance? What should be top of the list?
Four years on the CDS is in a fairly healthy state but, as ever in a democracy, there is stuff still to do. There are unravelled threads, incomplete projects and outstanding issues. It is messy, ragged and never complete - just like in RL.
Posted by Patroklus Murakami at Friday, October 24, 2008

I've got some questions about the CDS...
How many citizens are there?
How happens the election, the vote system? (I have in mind the problem with the president's election of the alphaville government in The Sims Online)

Hi Croc, thanks for your interest :)

I think there are about 70 citizens in the CDS currently. We recently added a new sim to our territory so the numbers may have gone up.

We hold elections for the Representative Assembly (our legislature) every six months in January and July. The head of the executive branch, the Chancellor, is selected by the RA shortly after inauguration. Both branches serve for six months at a time.

At election time voters can choose between the platforms of the different political factions. We rank them 1,2,3 etc according to preference. In theory, the number of seats each faction gets depends on the strength of the vote. In practice, because we use a combination of ranking and proportional representation we get a very disproportionate result which favours smaller parties. But perhaps that's more information than you wanted to know!

I hope that answers your questions.

Thanks a lot for the answers :)

Some more...
How controls the process and the results of the election?
Can anyone create a political faction?
Have a citizen ever been banned from the CDS?

Patroklus Murakami said...
This comment has been removed by the author.
3:51 pm

As well as the Representative Assembly (legislature) and the Chancellor (executive) we have a quasi-judicial branch called the Scientific Council. This branch controls the process of elections and declares the results. The SC is a self-selecting meritocracy; candidates are chosen to join based on their aptitude to defend the CDS constitution. They are usually invited to join by the existing members of the SC though there is a provision for citizens to put forward someone they think would be a good candidate. Candidates have to be approved by the RA though and this is not a 'rubber-stamp'; a prospective candidate was rejected quite recently.

Anyone can create a political faction but, due to an egregious law passed recently, you need to have a membership of more than 10% of the CDS citizens to put forward candidates for election to the RA. (In the past you only needed three people to form a faction to contest elections). I hope this law will be changed soon.

I don't believe we have ever banned a citizen from the CDS but we did ban one of our founding citizens - Ulrika Zugzwang. There was a long-running dispute involving a claim for payment for design work in an early phase of the project and Ulrika's deletion of a forum post which she didn't like. Ulrika subsequently deleted a number of people's homes in Neufreistadt and some of the city's infrastructure - twice :). She was then banned from the territory and remains so. This took place over two years ago.

I found the Code of Law on the CDS site, but I can't find the decisions adopted by the Executive Branch... Does it adopt acts?

And how many people form the gouvernment? I read 5 for the RA, percentage of the overall population, but what about the executive?)

Hi Croc. To answer your questions, the Executive Branch does not adopt 'Acts'. The Chancellor will often post information on our forums about issues s/he is considering and announcements about decisions taken. Most of this has focussed on land use since that is part of the Chancellor's remit.

The RA size is based on population, it's roughly 10% of the population at census time (a few weeks before the twice-yearly elections). Currently, the RA is 7 members. The Chancellor can appoint as many people as s/he wants to various posts but only a few are paid for (usually a nominal L$1000/month) and the RA decides the budget for that. The Chancellor tends to appoint a Public Information Officer and other events-related staff and people with caretaker roles for keeping our sims neat and tidy and dealing with any (rare) griefer activity.